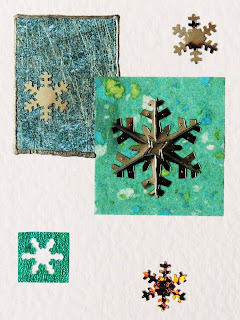 Preparations for the big day are taking up all of my time and the small amount of painting done isn't in a fit shape to share. I've been battling a very stubborn painting but to no avail and now time has run out. (A lesson learned in not trying to fit too much in methinks.) No matter, 2011 has ended on a high note with a successful exhibition at the Hayloft.

I would like to finish my last post of 2011 with a special message of thanks to everyone who has shown me so much support throughout the year both in and out of the blogosphere. I wish you all a very happy holiday season and a happy, healthy and successful 2012. I look forward to catching up with everyone in the new year.


Wow! What a storm we had last night! High winds and lashing rain, the kind of night that makes you glad to be home and tucked up in the warm. For the most part it's been a day of sunshine with the odd shower but as I type the rain is making a return and the wind is picking up. This evening will be a time to hunker down with a good book, I recently bought Turner on Tour by Inge Herold ISBN9783791332116
which is making for some interesting reading. For a small book it is nicely illustrated too. At the moment I am exploring the chapter on Venice and dreaming of a return trip..... sigh....

So to spite all of this mucky weather that's around I thought I'd share this painting from the summer. I have relied heavily on photographic reference with the memories of the waves breaking in one particular spot in my head. It was quite a calm day and the sea was flat but right at the last minute the lazy swell would have one last surge of energy before hitting the sand. An almost, '..oh go on then if I must..' half hearted attitude.

I'm in the middle of a battle at the moment with a painting started last week. The pressure is on as I want to have it finished before the Christmas break.
Posted by Lisa Le Quelenec at 16:30 6 comments:


Explorations of some of the treasure I've picked up recently. All of these have been drawn using coloured pencils on buff coloured paper.

A while back after a very windy day I picked up lots of ginkgo leaves but couldn't find the tree. I assumed it must have been in someones back garden. I found it last week when I took a different route. A large area of the street was golden with the leaves that had fallen. A few more specimens came home with me and now I'm thinking of a mini project exploring these lovely shapes.

Light across the bay


Stage 1&2, blocking in the basic colours using buff titanium, azure blue and indanthrene.  This painting is on HOT PRESS 300lb Arches, my favourite watercolour paper. Then using a lot of dry brushing I built up the tones I needed to give shape to the waves in the bottom section. I made the horizon especially dark using indigo mixes knowing that this would become much lighter at a later stage as more layers were added. I wanted to have tiny, subtle touches of dark in this area that would blend into the haze.

At stage 3 I could add in the silhouette of Old Harry Rocks and the delicious bright light that underlined it. Once dry I added more dry brushing to soften and lighten the dark at the horizon. I used thick blots of paint to suggest the sparkles, a lot of them were pure colour and unmixed titanium white. Touches of phthalo blue were also introduced at this stage. It doesn't really show up in the photo but I lightened the bottom wave shape with patches of the darker blue still showing through but in much smaller amounts.


Stage 4 and more dry brushing and glazing over the the whole of the water adding back some warmth. I am happy with the patina of the surface that is building up now. All the layers gel together each one partially hidden from the next but with dots and dashes showing through for a shimmering surface of colour.  A new wave shape had suggested itself and was painted in, the shadow of both of these two waves was added with glazes of indigo and phthalo. A very pale dilution of the wave glaze was used in the top of the sky.


Finally another layer of a predominantly azure mix over the water to inject a bit more colour and warmth, some dark added into the bottom wave and a few highlights..... and I'm going to call it finished. I think there will be a bit of a crop to take out a little of the sky when it comes to framing, but I won't think about that until I've gotten some distance from it.


I mentioned earlier about the patina of the surface that built up with the layers of paint. This is an aspect that is very important to me in my acrylics. As I started with a completely smooth surface for this painting, the texture that you see is just made from paint giving me more control. Had I used a paper with tooth it would look completely different and more uniform, this is something that I can find quite constricting. I've tried to get a photo of the textural qualities of  the painting - it was hard to get a close up with my camera. ( my camera skills still need improvement - the painting has a straight horizon too ;o) ) In contrast the sky area is completely smooth where it had been built up with glaze. 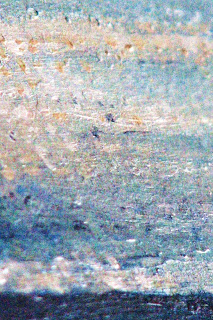 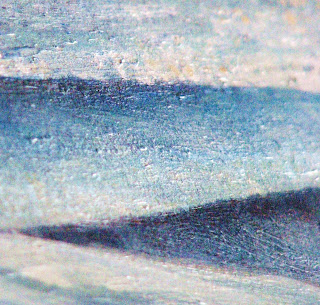 So this is what I have been up to over the past week or so, the short days we have now make for much shorter painting time. I've never been very good at painting by electric light despite using daylight bulbs. It does mean more drawing is back on the schedule though which is my silver lining.

Lisa Le Quelenec
I'm an artist living on the Dorset coast. I aim to capture the sense of light and space of the ocean and its effect on objects that have travelled and been shaped by the ebb and flow of the tide. From the tension before, during and after the storm to the quieter more contemplative atmosphere of subdued waters the ocean has captured my heart.

Copyright of all images are the sole property of Lisa Le Quelenec. Images may not be used, copied or stored without the consent of the artist.